Anyone who has been to a music festival knows maintaining personal space is not an option. Trust me I can tell you from personal experiences where I have gotten shoved, walked on almost, and thrown sideways thanks to the people fighting next to me. Like seriously can’t we just enjoy the damn music?

Well speaking of getting your personal space invaded by idiots, this summer’s most highly anticipated music festivals are taking a stand against selfie sticks. Both Coachella and Lollapalooza are banning selfie sticks and other GoPro attachments. Australia’s Soundwave Festival and several UK music venues including the O2 Arena, SSE Wembley Arena and O2 Academy Brixton have also joined in agaisn’t selfie sticks.

Too bad they won’t do the same at theme parks here in Orlando. Seriously every five steps there is someone with a selfie stick stopping in the middle of your pathway taking a group selfie….wait for it… vacation groups of 30 or more. Yup! So if you are planning on going to any of these huge music festivals make sure to read what you are allowed in and time to take your old school camera and selfies. Although you can choose to actually pay attention for your money’s worth to every performance that hits the stage instead of taking photos of your flower crown and Kylie Jenner’s lips.

Listen I love selfie sticks when I am with a group of friends hanging out but a couple of minutes not as a whole day thing. Now I love the idea of having a selfie stick or a GoPro for concerts and festivals if you are really short like me and you can’t see crap. But at the same time I understand how annoyed I get when I have someone in front or behind me with a selfie stick in small amount of personal space. I feel invaded and with the amount of heat we get here in Orlando on the summer time I would hate to be in a music festival with sweaty people touching my skin as they take a selfie. Imagine trying to enjoy a performance by Hozier or Fall Out Boy and have someone in front of you with a selfie stick in the middle of your favorite performances not letting you enjoy watching your singers or bands. I would and will throw a fit with how expensive these tickets are, are you kidding?  And the reasoning for this action :selfie sticks obscured the view for other people in the crowd, noting the increased amount of sticks in the crowd in music festivals. Like some people like to call them selfish sticks.  Because they make you take up a lot more space in a crowded place than you should invading other people’s personal space.

What are your thoughts?

Just wanted to share with you guys some of the best music videos that I am loving right now.  The special effects, editing, lyrics, musicality, and vocals. I listed a variety of the songs I have on my playlist for all kinds of emotions. Have fun listening!

Nate Ruess – Nothing Without Love

HAIM- If I Could Change Your Mind

London Grammar is a British band leaded by vocals from Hannah Reid, keyboard Dot Major and guitarist Dan Rothman. The band’s sound comes off as secretiveness, quietly dramatic, and almost haunting very easily compared to Florence and The Machine.  Hannah’s strong vocals are full of power yet gentle enough to make you feel the power behind each word of their lyrics.  Their tracks are as song-like as they are showcases for gentle digital rhythms. Their songs are based on the raw emotions of life experiences collaborated by all three band members. Their album “If You Wait” was released September 10, 2013 in the .U.S.A. and it debuted at number two the UK Albums Chart with first-week sales of 33,130 copies. Meanwhile in 2015 it peaked at 91 in the .U.S. Billboard. 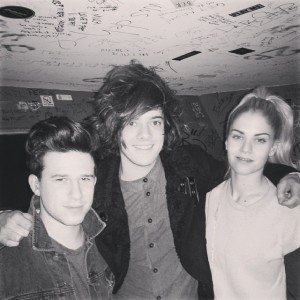 They are currently on tour there are two shows left from their 2015 concerts:

July 17  at the Melt Festival in Grafenchainichen, Germany.

And if you can’t wait to get your hands on their album here are some of the US Links for you:

Here is one my favorite songs! Strong -London Grammar

Feel free to show some love at any of the socials:

This article ladies and gents is what I have been talking about in the past few days. There is someone for everyone but first you must learn to love yourself , radiate that love and it will love you right back

New Zealand’s The X Factor judges, Natalia Kills and Willy Moon, were let go from the show after bullying contestant Joe Irvine on the show Sunday night. Wow did Natalia Kills really disappointed me with her actions but her husband not so much you can tell he has an ego. Yes I called him out because its true. She must be blindly in love. Who would have thought such a beautiful talented singer would be so dark, evil, and a bully?

Joe performed “Cry Me A River” on the show looked super handsome and delivered a beautiful performance. But not everyone’s likes apparently as the British singer Natalia called him a doppelganger of her husband Willy and attacking the contestant with her words as I quote:

“As an artist who respects creative integrity and intellectual property, I am disgusted at how much you have copied my husband, from the hair to the suit,” she said. “Do you not have any value or respect for originality? You’re a laughingstock. It’s cheesy, it’s disgusting. I personally found it absolutely artistically atrocious I am embarrassed to be sitting here having to even dignify you with an answer of my opinion”

Meanwhile her husband and fellow judge also joined in adding fuel to the fire with comments like  “To me it feels a little bit cheap and absurd. I mean you’re like Norman Bates dressing up in his mother’s clothing its just a little bit creepy and I feel like you’re going to stitch someone skin to your face and the kill everybody in the audience BUT do you!

Where to Natalia added “I am going to say it it was absolutely disgusting. You have no identity I’m ashamed to be here”

” I think you look good because you’re dressed like my husband” to which by this point Mel another one of the judges was the only one to intervene and defend Joe. Joe on the other hand received support from famous superstars Lorde, Ed Sheeran, and many more. Of course his amount of supporters throughout the world also escalated quite quickly. Later Natalia apologized for her actions blaming the production staff for making up controversy and dialogue for ratings. The couple fled New Zealand right after the show and leaving everyone to wonder who would replace them. Due to the amount of controversy aroused MediaWorks who is the broadcaster that airs X Factor and its Chief Executive Mark Weldon announced the two’s departure from the show Monday in a statement to New Zealand’s The Hits.

“Contestants put their all into this competition and they should expect to receive feedback and criticism that is professional and constructive,” he said. “We no longer have confidence that Kills and Moon are the right people to perform the role of X Factor judges and they will leave the show, effective immediately.”

The new judges added to the panel are Australian recording artist, actress, and television personality Natalie Bassingthwaighte and Shelton Woolright drummer of British rock band I AM GIANT. Here is to wishing the best of luck to both judges, all of the contestants, and may the best one win.  Remember to have ZERO tolerance for bullies they can come in all shapes, sizes, and apparently in singers who are so talented but so ugly inside.

See the whole controversy on the video below:

South by South West (SXSW) is the annual film, music, and interactive festival in Austin, Texas which showcases the best, and newest talents industry who are looking for their “big break.” Think Coachella but even better cause you can check out other artistry in the film and interactive aspects of the industry. The music festival it has over two thousand two hundred acts that perform over hundred of different stages throughout the week. More than likely they have a large amount of followers and just being able to perform at this mainstream event allows them to connect with fans at a larger scale. Here are a few of the ladies in the music industry who are rocking the charts right now, and are a few of my favorite singers. So if you haven’t check them out yet please do so!

When I see articles written by other authors like Jamie Varon and there’s an instant connection I love sharing it with you guys as well because you might get something out of it too x:)